The formula is significant because mobility rates can have large variation depending on the formula. The graph below compares the GOSA rate to an alternative rate, labeled the “new student rate”, defined as the percentage of students enrolled on May 1 who started at the school on or after October 1.

The table below reports regression results of 2017 SGP score2 regressed on mobility, English learner status, direct certification for free lunch, special education status, and school fixed effects3. After controlling for these other factors, mobile students have an SGP score 5.5 points lower in Math and 1.1 points lower in ELA than their non-mobile peers. The ELA difference is not statistically significant. 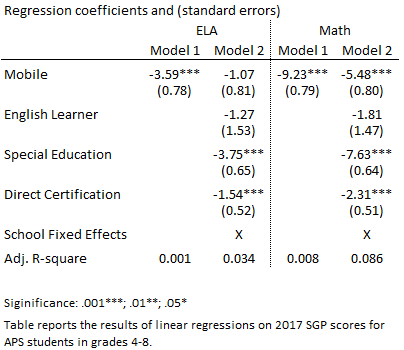 For context at the student level, a 5 point improvement in math SGP score typically translates to about five scale score points, which is 10% of the distance from developing to proficient achievement levels (475 to 525). At the school level, note that a school with a 20% new-student mobility rate would then have a Math SGP average that is one point lower due to mobile students (20% x 5 points).

The controls in the regression equation above are limited, and likely do not fully capture the difference in family circumstances between mobile and non-mobile students. For example, a student might be mobile because of a divorce or family seperation, which could have an effect on student achievement independent of mobility. So the reported SGP gaps are likely an over-estimate of the actual effects of mobility.

APS Insights is the data site for Atlanta Public Schools and is maintained by the Data and Information Group (DIG).