The Georgia Department of Education and the Governor’s Office of Student Achievement released 2018 finance star results on January 24, 2019. Finance stars are calculated using each school’s or district’s per pupil expenditures, converted to a percentile rank, compared to their CCRPI score (school performance rating). See this page for details. Finance star results have been added to the state’s CCRPI portal.

We do not compare CCRPI to expenditures in this blog post because CCRPI is correlated with school poverty rates1. Instead we graph per pupil spending against average Beat the Odds scores (BTO) in the visual below. Beat the Odds measures how a school performs on CCRPI compared to other schools that serve similar students. For example, a BTO score of 2 indicates that a school’s CCRPI is two points higher than the average CCRPI of similar schools. See this post for more detail on BTO.

The visual shows districts that have at least ten schools. Atlanta Public Schools has the highest per pupil expenditure of these districts, at $15,322 and the next highest district is Clarke County at $11,713. Atlanta also has a relatively high BTO score of 3.2.

Some other points of interest in this visual:

The finance stars data also includes per pupil spending at the school level. To calculate school-level spending, in addition to each school’s allocation, GADOE divides centralized district costs proportionally to the schools. To calculate school-level spending for district charter schools, GADOE uses each schools’ allocation, plus 3% to represent services received from the district. For more information, see page 8 of the calculation guide4.

The visual below shows APS elementary school spending per pupil graphed against student enrollment. Small schools tend to have higher spending per pupil due to having more required staff positions per student. For example, most elementary schools have one principal and one assistant principal regardless of size. Also, class sizes are often smaller at small schools because if a school has just enough students in a grade level to get an extra teacher, this has a greater effect on average class size in a small school than in a large school5.

Use the filters to change grade levels or districts.

The unfunded pension expenses described above are included in the budgets of traditional schools, but not charter schools. So traditional school per pupil expenditures are effectively about $1,300 lower than shown in the graph above.

Per pupil expenditure is also influenced by the percentage of special education students and students in poverty. The regression table below shows that including these variables, and a squared term for enrollment, explains 83% of the variance in per pupil expenditure at the elementary level. Some of the remaining variance is likely explained by the type of disability served at school-based regional units, and by other special programs. 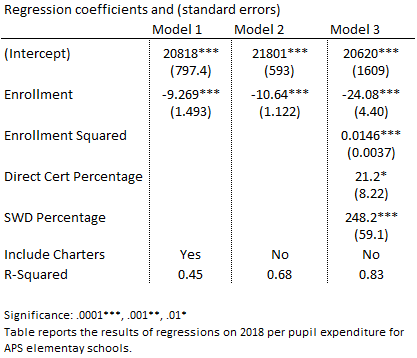 The median elementry school enrollment in APS is 452 students and the median in Georgia elementaries outside of APS is 585. The enrollment coefficients above show that expected spending in APS is about $1,200 per pupil less on a school with 585 students than one with 452. This suggests that some of the additional per student expenditures in APS relative to other Georgia districts is spent on having smaller average school size.

The FY2018 school allocations, visualized above, were mostly determined by staffing allotments. APS school budgets for FY2019 were built with student-based budgeting, which that means money is allocated based on the number of students and their needs, instead of based on the number of staff. So we’ll likely see a different relationship between per pupil expenditures and school characteristics when the FY2019 data is released. See here for more detail on APS’s student-based budgeting.

APS Insights is the data site for Atlanta Public Schools and is maintained by the Data and Information Group (DIG).